Making an Old T-shirt into a Movie

Steven Soderbergh has completed directing his much awaited (by some) homage-to-Che film – what an a__hole.

It’s bad enough we have the romantic illusion/adventure; “Motorcycle Diaries” to make heroic the concept of an ego-maniac brat’s adventures on a motorcyle (like, how often does that ever happen? How exciting!).

When are these pampered wealthy clowns (the film business’s socialist totalitarian worshipers) going to get it into their pathetic little hollow-wood brains that the passionately anti-gay firing squad leader (Che Guevera) was not an ideal figurehead for the “progressive” cause. (Of course, maybe they really do understand what progressives have always stood for and therefore realize Che’s a perfect symbol of progressive anti-freedom authoritarian elitism).

Okay, Che looks cool in an accidental photo moment that now graces the T-shirts of a million and one clueless middle class drones but, …get a clue.

I’ve said it before and I’ll say it again in the most simple terms -- Che, Castro, Mao, et al were/are bad guys. Making another cult-rallying film honoring such a tyrant is pathetic and despicable.

A wealthy Harvard educated pseudo-intellectual -- Barack Hussein Obama -- (full name deliberately noted) has announced his belief that – to paraphrase all leftists – “we need to ‘cut back’ ” and restrain our free lifestyles and choices to conform to the conditions that “the world” demands of us. When control freaks like this utter such cliché nonsense I have to wonder when he, she, or “the world” (usually meaning those in the world who don’t like us) is going to start “cutting back” themselves. In this instance I have to also wonder…why would a person running for president of the United States make a point of our “need” to conform to other countries’ goals to reduce our standard of living?

Nonsense statements like Obama’s hearken back to the days of the Jimmy Carter school of governing, where “malaise” and “sacrifice” become public policy. America's constitution gives no authority to the President to constrain the lifestyles of American citizens. It's actuallly supposed to constrain the actions of politicians and the state (though that wise concept is now missed on some). North Korea has certainly excelled in the “sacrifice” and “cutting back” style of government but it hasn’t seemed to enhance their world or any of their neighbors. No I’m not saying that Barack Hussein Obama harbors the same threat as a fascist (okay, they say “socialist”) dictatorship. I am saying that his worldview ultimately stems from the same mentality as all socialist control freaks, from mere bureau-clones to the most ruthless of tyrants, that citizens should be mere servants to an elite’s ideals; the belief that individual citizens must sacrifice and reduce their hopes and dreams merely because some politician says they should (must!).

I don’t want to piss “the world” off, but I could care less what the socialists of the world (and that is what they mean when they say, “the world”) think of America’s continued successes in elevating average citizens’ condition to historically unparalleled levels.

I’m utterly amazed that this elitist clown (again, Barack Hussein Obama) has gained the influence he has, but then again, he has the entire “progressive” establishment behind him (most of the media, entertainment, “education” and the new parasite class that has been nurtured upon government dependence).

In most opinion polls Americans rank consistently among the highest in general life satisfaction and optimism regarding the future. This is hardly an audience that grovels to politicians and the mighty state for “hope” and an amorphous concept of “change.”

We keep hearing and seeing what a heroic trailblazer Obama is (by a media establishment in editing overdrive). In the end, all serious inquiry finds that Obama really doesn’t have anything special behind his rhetoric than the continued desire of “progressives” to reduce individuals to ants in a hill under their command.

I “HOPE” (to use his overused word) Obama doesn’t win. As for “change,” He offers about as much change as the local tax collection office -- garden-variety bureau-socialist authority over private lives.

(…and no, I don’t think John McCain offers anything grand beyond some degree of pragmatism in international affairs and taxation).

...OK, maybe some of you on the "progressive" (socialist) end of politics really "want to make a better world."

Maybe some of you "care about others" in a truly noble and altruistic way.
Maybe you believe in "sharing" (and using your own daily behavior as an example?).
Maybe you really believe in "compromise" and "talking to those we disagree with" (dictatorships who wish to destroy you, your family, and your fellow citizens – obviously, compromise and "talking with" conservatives is not on your menu).

Why then do so many of you simply project yourselves as cocky, pampered, arrogant, self-righteous phony snobs and control freaks who seem to really think your shit doesn't stink?

and maybe others will take your ideas more seriously.


...OK, maybe some of you on the "progressive" (socialist) end of politics really "want to make a better world."

Maybe some of you "care about others" in a truly noble and altruistic way.
Maybe you believe in "sharing" (and using your own daily behavior as an example?).
Maybe you really believe in "compromise" and "talking to those we disagree with" (dictatorships who wish to destroy you, your family, and your fellow citizens – obviously, compromise and "talking with" conservatives is not on your menu).

Why then do so many of you simply project yourselves as cocky, pampered, arrogant, self-righteous phony snobs and control freaks who seem to really think your shit doesn't stink?

and maybe others will take your ideas more seriously. 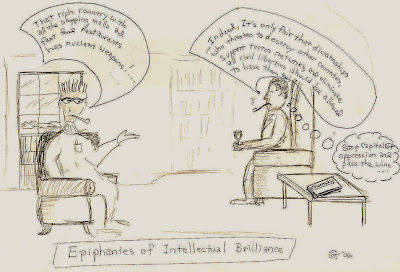 More "Contradictions In The [Socialist] Worldview"

Innate "Contradictions" in capitalism are something Marxists have continually taught as gospel. Even in its role as the much hated symbol of capitalism in the world, Americans are somehow often seen to have little contradiction though -- we're just bad.

We are often reminded of how little American's know of "the world" yet I have met very few among those non-Americans who hate America that have actually been to America or really know anything about it aside from the agenda-laden rants of fellow socialists – American or otherwise.

"American's are fools, but Noam Chomsky, Howard Zinn, Al Gore, Michael Moore, and George Clooney et al. are Geniuses" is the statement of someone who doesn't appear to know the meaning of "contradiction."

“Liberal Fascism…” The Not So Secret History of The American Left

...If I had the time, energy, and intelligence to do so, this is the book I would liked to have written.

If the average leftist were to merely read the title of Jonah Goldberg’s new best selling book they’d likely think it was just another “right-wing rant” that seeks to point out what is obvious to so many conservatives and libertarians; Leftists (“liberals” or “progressives”) are Fascists (!). Assuming from the title that Goldberg’s book deals with this issue simply and without supporting historical facts would be a mistake.

The Term "Fascism" is, of course, tossed around a lot when leftists seek to brand anyone's ideas they disagree with as unworthy of acknowledgment. But, can the right legitimately use the "F" word when describing the left...? Yes, they can and should because, as Goldberg thoroughly proves, they'd be correct in doing so.

Although the author does not intend his book to be taken as scholarly or academic, it is indeed just that. A rich array of facts from the French Revolution and America’s so-called “Progressive Era” through the present, that details and proves beyond a reasonable doubt that today’s “liberalism” is a kindred spirit to fascism (and no, it is not hyperbole to say this).

People like myself have known for some time now that Mussolini was a follower of Marx to his dying days. We know too that NAZI stood for National Socialist German Worker’s Party. We've looked with warranted suspicion upon the philosophies articulated under the label "post-modern" and have realized that the philosophers who most influenced Nazis and Fascists are the same ones with the same ideals that have influenced and motivated the "revolutions" of the left.

Those who have some genuine knowledge of the left and its beliefs know that Fascism, Nazism, Communism, and a wide variety of socialisms have a great deal in common with each other. No matter how heretical they may see each other, their common enemy has first and foremost always been free, open, pluralistic, non-utopian, capitalist society.

As a former secondary school history teacher I can testify to the skewed themes and “information” that classrooms and textbooks have sought to inculcate in youth. So it is that the very words “progressive” or “liberal” have come to mean good, caring, loving, kind, and humanistic. An accurate inquiry into the history of leftism however finds it all too often to mean, racist, nationalistic, militaristic, authoritarian, and anti-individualistic -- fascist. The average high school student is told to read Upton Sinclair's, "The Jungle" and is told of the wonderful things "Progressives" did to "protect us" from ourselves...but, how often is the term eugenics associated with "progressivism," as it should be?

Goldberg's book is not a pedestrian conservative attack on the left, it's a very informative, interesting, and richly discerning inquiry into the history of authoritarian political movements and the psychological motivations that drive them. If one seeks a good overview of the philosophy of various "isms" that have sought to wrest control of the individual from his or herself for the glories of collectivist and state power, this is the best book I've seen on the subject.

Goldberg's, "Liberal Fascism" is long overdue and provides depth and honesty to the issues of history, political philosophy, and culture.